Waiting for your UK visa - is unpaid acting work OK? 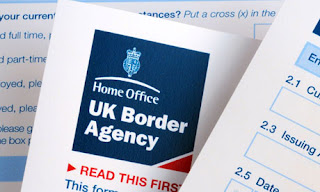 Happy 2013. I hope you're all feeling motivated and excited to move your acting careers forward. I am.

I just got a question from Paulina, an actress who has relocated to England from New York City and is now in visa hell:

Q: I fell in love with the country and a Brit while shooting an indie thriller in 2011... I can't work until I get my first FLR(M).  I'm with British Actors Equity, registered with Spotlight, and an Actors Centre premium member.  My question is, may I work on unpaid roles or fringe/profit share while awaiting the UK Border Agency's (UKBA) verdict? I certainly don't want to commit any grievous errors while on the sceptered isle....

A: OK first - for those of you who aren't familiar, the FLR(M) is the application to stay in the UK as the partner of a person present and settled in the UK and if you really want to see all 46 pages of it, go here. Personally it gives me heart palpitations just to think about all that stress again but if you want to come to the UK, you'll have to get very intimate with forms like this to sort out your visa.

Now, as to the question. Technically until you have your work visa you're not allowed to work. But it's not so easy to find the precise definition of 'work' according to the UKBA. Obviously no money can exchange hands. But if it is unpaid, is it still considered work? If you're really concerned I'd suggest contacting a professional who deals in these matters like an immigration lawyer. But I'd say if it's just a fringe show, it's a short run and it's not making national papers then you probably have a very low chance of being discovered. On the other hand if there's paperwork, National Insurance numbers and bank accounts involved then I'd back away just to be safe.

The other thing to consider is - why do you want to do the work? Is it just for your own pleasure or is it to get an agent and/or attract casting directors? If it's for pleasure then you're probably fine. If it's the latter and an agent wants to sign you or a casting director wants you for an audition - they'll start to lose interest if you can't legally work. If the visa is only a few months away or less then that may be OK, but any longer and you risk losing the momentum you've started to build.

That's what happened to me in 2004. I was here on a visitor visa, did a showcase and got some great meetings set up with agents and casting people, but when I told them I didn't have a visa they said to come back when I did. By the time I was finally back with the right visa it was spring 2005 and many of those hard-won contacts slipped out of my grasp. So my advice is even though you're probably eager to get your UK career going, don't start until you're legal or it's wasted effort.

Paulina said…
Thanks Kosha! Just to be safe, I'll hold off (it may be a while; I hear the current backlog at the UKBA is nine months.)

I don't want to be deported by a seemingly innocent involvement in, say, a student film...!

Thank goodness for The Actors Centre in the meantime.

Wishing you continued success and happiness for 2013!